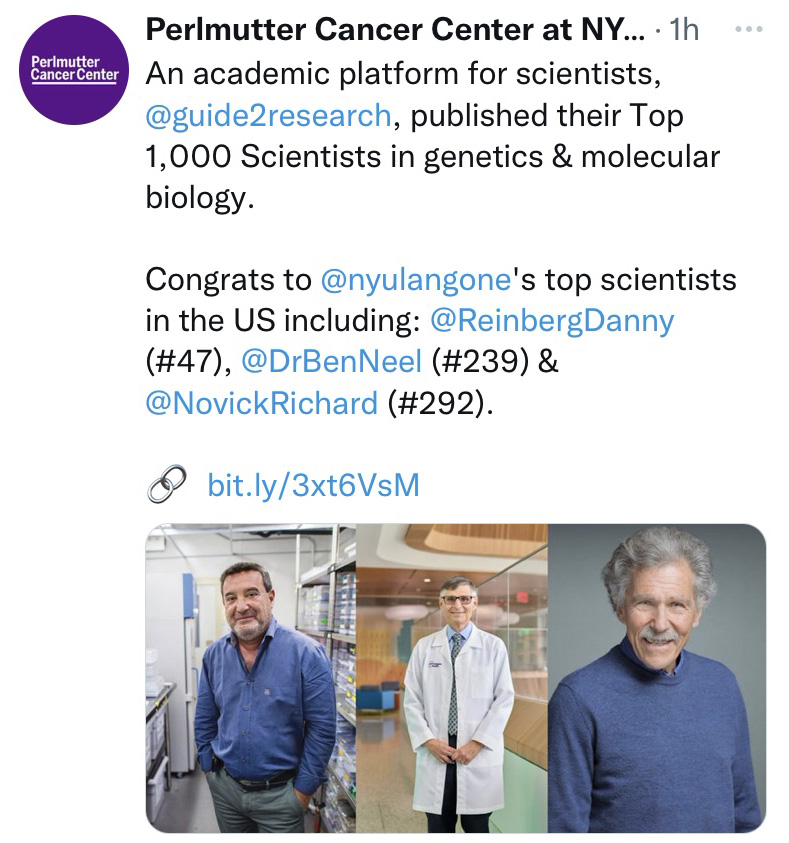 The inheritance of changes to proteins that package DNA—as well as the DNA itself—maintains the identity of cells as they multiply, a new study finds.

Led by researchers at NYU School of Medicine, the study sheds light on the process by which each cell transmits its identity to the next cellular generation as it multiplies by dividing in two during development. All cells have the same, complete set of DNA, but each is programmed to activate or silence certain genes, determining whether they become, for instance, heart cells instead of intestinal cells, researchers say.

Published online on October 31 in Cell, the new study confirms that mechanisms preserving cell identity are based on how DNA is packaged. Inside the nuclei of cells, chains of molecular DNA are known to be wrapped around sets of proteins called histones in repeating units called nucleosomes, all within the larger superstructure called chromatin.

Further, the “tails” of the histones are known to extend outside of this wrapping, making them available for chemical changes that determine whether a chromatin region is “open,” with the DNA accessible, or tightly compacted, with the genes residing there silenced. The current study authors devised a method to track whether chemical modifications to histones in nucleosomes were accurately passed from a parent cell to the same DNA regions in the two cells it forms upon division.

“Based on our new method, experiments suggested that compaction based on histone modifications at key positions is a fundamental feature of inheritance in cells, with the related silencing passed on to keep genes from being expressed in the wrong context,” says study first author Thelma Escobar, PhD, a postdoctoral scholar in the Department of Biochemistry and Molecular Pharmacology at NYU Langone.

The research team developed a system in which “old” nucleosomes, those positioned throughout a parent cell’s DNA, could be tagged before the DNA was copied as a prerequisite to cell division.

Researchers then used the specificity of the CRISPR-Cas9 gene editing system to attach a molecule called biotin—but only to those nucleosomes present within a single gene of their choice. That in turn let them follow the fate of these marked nucleosomes in genes known to occur in either open or silent chromatin as the cell copied its DNA.

Based on their experiments, the authors argue that chemical modifications to histones that foster chromatin compaction are inherited as a fundamental property preserving a cell’s identity. Open chromatin, on the other hand, did not rely on this “positional inheritance,” as its DNA can be activated as needed by regulatory proteins that interacted with the DNA directly.

Furthermore, the research team found that only within compacted, silent chromatin could the proteins responsible for chemically modifying histone tails recognize (“read”) modifications in parental nucleosomes and then duplicate (“write”) them on newly forming nucleosomes.

The study also suggests that histones forming nucleosomes in silent chromatin may be escorted to the proper place in replicating DNA by novel chaperone proteins, which the researchers are currently seeking to identify.

“Strikingly, it may be through gene repression that histone modifications show a heritable gene regulatory system not present in more primitive cells like bacteria, potentially playing a role in the greater complexity of human cells,” says Danny Reinberg, PhD, the Terry and Mel Karmazin Professor of Biochemistry and Molecular Pharmacology at NYU Langone. “At the same time, cancer arises in some cases from this very complexity—as cells that randomly lose compaction due to a loss of histone chemical modifications see their usually silenced genes become active.”

“In this way, cancer cells evolve to overcome treatments or limits on their growth, and we hope the current work will suggest new ways to stop this,” says Dr. Reinberg, also an investigator with the Howard Hughes Medical Institute.

Along with Dr. Escobar and Dr. Reinberg, study authors from NYU Langone were Ozgur Oksuz, Ricardo Saldaña-Meyer, Nicolas Descostes, and Roberto Bonasio. Funding for the work was provided by the Howard Hughes Medical Institute and National Cancer Institute grants 9R01CA199652-13A1, 3R01CA199652-14S1, and P30CA016087.

Our Review of the high-maintenance PRC2 is now out.

We hope our “writing” and your “reading”
provokes a PRC2-like mechanism that activates the field! 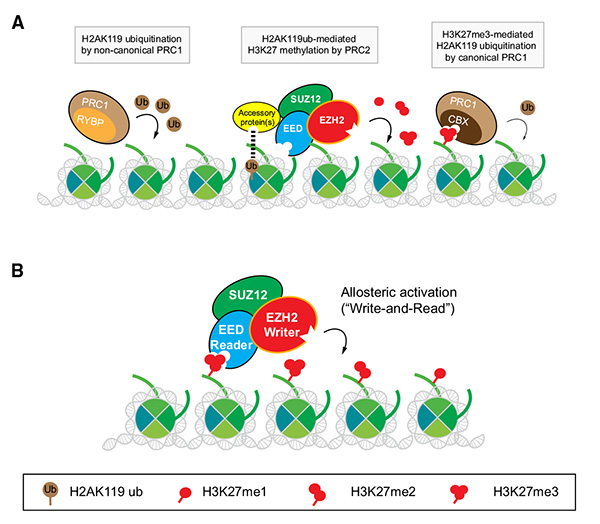 Danny Reinberg has been awarded an International Blaise Pascal Chair to the Institut Curie-Centre de Recherche Université Paris, France.
He will be on Sabbatical for 2017 through early 2018.

The Blaise Chair, established in 1996 by the Government of the Île-de-France Region for internationally acclaimed foreign scientists in all disciplines. A scientific committee annually selects the most outstanding candidates from all over the world. Since its inception a number of famous scientists were the Blaise Pascal Chair laureates: Gérard Debreu (UC Berkeley, 1983 Nobel Prize in Economics), Ahmed Zewail (Caltech, 1999 Nobel Prize in Chemistry), Igor Mel’čuk (University of Montreal, the world leading researcher in linguistics), George Smoot (LBL, 2006 Nobel Prize in experimental Astrophysics), Robert Langlands (UBC, 1996 Wolf Prize, one of the most influential mathematicians of the 20th century), outstanding theoretical physicists Gabriele Veneziano (CERN/College de France), Alexander Zamolodchikov (Rutgers), and others.

New Honor for Graduate Student Jeffrey Granat.
He has been named 2017 Vilcek Medical Scientist Training Program (MSTP) Scholar.
This is a merit-based scholarship that supports students for two years during their graduate school training. 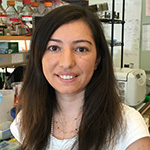 Graduate Student Havva Kara Ortabozhoyun has been awarded an NIH Fellowship that starts June, 2017 for 3 years.

This is a National Research Service Award through the Eunice Kennedy Shriver National Institute of Child Health and Human Development
Title: “Identification of factors that affect the insulator function of CTCF” 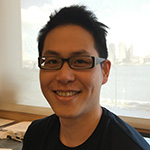 His application by the DNA Mechanisms in Cancer Peer Review Committee was rated “Outstanding”.
Title: “Dissecting the Role of EZH2/PRC2 in Metastatic Melanoma”

Our Review of the high-maintenance PRC2 is now out.

We hope our “writing” and your “reading”
provokes a PRC2-like mechanism that activates the field!